Any building or development plans must, by law, consider the impact of the proposed project on the surrounding environment, including ecological factors such as habitats, wildlife and vegetation. Navigating a planning application can be a long-winded and tricky exercise but obtaining ecological advice early on can help prevent rejected applications and make it an altogether smoother process.

In this article, Jonathan Cocking, Managing Director at JCA Ltd, Arboricultural and Ecological Consultants, explains what species to look out for and how the law protects them.

There is a variety of legislation that protect species and habitats in the UK, the main ones being the Conservation of Habitats and Species (Amended) (EU Exit) Regulations 2019 and the Wildlife and Countryside Act 1981 (as amended). Whilst neither rare nor endangered, badgers still receive protection under the Protection of Badgers Act 1992 because of they are often targeted by those engaged in blood sport.

The species that are most likely to affect a planning application are detailed on the table below. The legislation for these species prohibits, killing, injuring, taking, possession, trade and the impairing of breeding. Many of them can only be surveyed at certain periods of the year, therefore to prevent delays in the planning application and the development itself, it’s important to involve ecological experts as soon as possible.

Another aspect to note is the flora on site. Invasive plant species can be detrimental to developments. Invasive flora that is unidentified or mistreated can lead to prosecution as under schedule 9 of the Wildlife and Countryside Act 1981 (as amended) developers are legally required to prevent invasive non-native plant materials spreading into the wild and prevent them from spreading on to a neighbour’s property.

Here are our top five invasive plant species we have commonly found around development sites.

If your site has flowing or still water bodies then you might be at risk of New Zealand pigmyweed. The problems it can cause to your development is extensive, as it can cause dense mats that can hinder drainage systems.

These small trees and shrubs are often found in rough or waste ground, they form widespread root systems that can be hard to eradicate if not dealt with rapidly.

This is an abundant species of riverbanks and damp locations. During the summer months it can obstruct water flow causing floods. Furthermore, in the winter months it can leave banks bare leading to erosion and subsidence.

This invasive species has had its time in the limelight as being reported in the national media for its negative effects. It dominates and blocks access to rivers leading to soil erosion and flood risks. However, it’s renowned for causing serious skin blisters.

Often found on development sites as it can endure a wide range disturbed condition. The robust shoots damages hard standing surface as is known to grown through buildings. 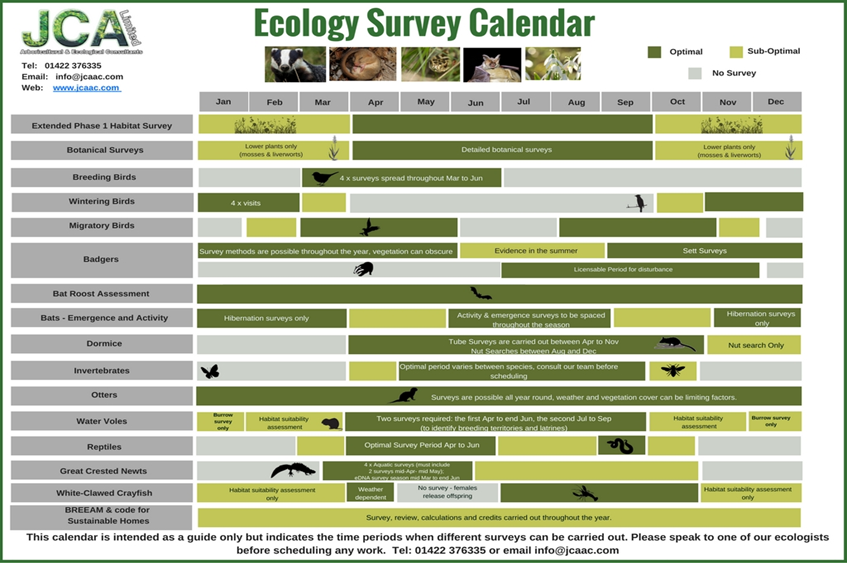 As with most things, to be forewarned is to be forearmed! An early site assessment by an ecologist - often referred to as a Preliminary Ecological Assessment (PEA) - is a cost-effective and proactive way to identify any potential wildlife issues.

If a site assessment or land searches indicate the presence of a protected species, then a targeted survey will be required. Seasonality plays a significant part when it comes to conducting the survey. Factors such as breeding and hibernation can make survey off limits, so timing is important. These detailed surveys will help in the development of a mitigation plan that allows the project to proceed whilst ensuring that the local ecology is managed properly.

Once a protected species has been identified, it is the ecologist’s role to advise on the strategy to be adopted to manage the situation. The first aim is to always try to avoid or minimise the harm to the animals during the work. This may involve relocating or removing the animal. The second aim is to ensure that the project does not result in any long-term detrimental impact on the animals’ local population. This is often achieved by creating alternative resting places or provide compensatory habitat, such as the installation of bat boxes.